More Space for a Growing Family

A growing family in Seattle needed more space; more space for kids, friends, and family. And, more solutions for the future.

MyKabin was the perfect answer.

When Moving is Not an Option, MyKabin Provides the Solution

Kevin Moore and Shanna Alvarez have two young children and a third was on the way. As two working professionals, they needed a bit more space to live a little more comfortably. Shanna’s mother was also paying frequent visits and staying with the couple, helping them with the children while they worked, and space was getting a little cramped.

“We have a 1940s house and it’s a bit old,” Kevin stated. “And we were having a baby and we just simply needed more space.”

Their first ideas? Either just sell their house and buy a bigger home somewhere else or do a major remodeling project. But neither of those were the right track.

“We got a quote for a remodeling project and it was astronomical,” Kevin said. “Just to start a project like that was going to be $100,000. And then we’d have to move out and live somewhere else while the work was being done and pay rent somewhere with two kids and a baby. It just wasn’t going to be feasible. We didn’t want to be house poor.”

A Cabin for the Family

Kevin and Shanna settled on the idea of a backyard cottage. After contacting five contractors, they discovered it was more expensive than they thought.

Then, they were referred to MyKabin.

“They took care of everything. A one-stop shop. The others would give us a base price, but then add in all the options and before you knew it, there was a lot to track and pay for. But MyKabin had one price. It was the type of pragmatic solution we were looking for.” 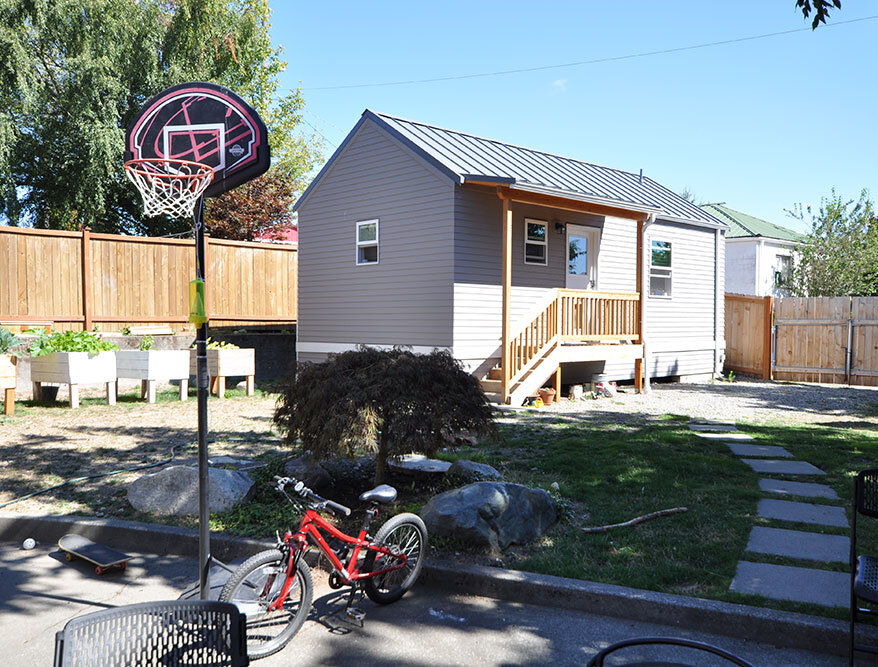 “They took care of everything. A one-stop shop. The others would give us a base price, but then add in all the options and before you knew it, there was a lot to track and pay for. But MyKabin had one price. It was the type of pragmatic solution we were looking for.”

Kevin and Shanna are recognizing the value of their MyKabin investment already.

“We never realized how useful it could be,” Kevin said. “It’s amazing how it’s given us so much flexibility in our lives. And we could not have timed it better with the Covid situation. When everything went into lockdown, our our dear friend and ‘auntie’ to our kiddos moved in and helped with childcare. As both parents and professionals now working from home, this allows us the space and privacy we need to work.”

…And Into the Future

For the future, the family is planning further uses for the home. They’re planning on taking an extended leave to visit family in Canada and renting the home while they are gone. And when they return, they’re hoping Shanna’s mom can move into the home.

They also talk about using it for other family members visiting or perhaps someday having an au pair live there full time.

When advising others about building a backyard cottage, the Alvarez’s always recommend MyKabin. “The warmth, the customer service, the flexibility of the product,” Shanna said. “It’s a great product. There’s a no-nonsense angle, which is great. Pragmatic. You get a good price and a lot of reliability.”

Need More Space for Your Family?

We’ll send you a no-obligation feasibility assessment for your property.

We will never spam, sell, or share your personal information with any third party (we hate that too).

Interested in something else?
Give us a call or send us an email.